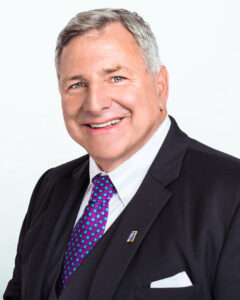 Ron Phipps, a REALTOR® from Warwick, RI, was the 2011 President of the National Association of REALTORS®.

Phipps, a REALTOR® for more than 40 years, is principal broker of Phipps Realty, a family business started by his mother in 1976.

In addition to being NAR’s President, Phipps has served as 2003 Regional Vice President, 2009 First Vice President, and 2010 President Elect. An NAR Director since 2000, he has also chaired numerous Presidential Advisory Groups and committees. As part of his service on the 2008 Advisory Group on Professionalism in the industry, Phipps became one of the founding members of REALTOR® University.

Phipps has been involved in leadership at state and local levels, serving as 2000 Rhode Island State President and 1993 State-Wide Multiple Listing Service President.

Other honors include 1995 Rhode Island REALTOR® of the Year, 1996 Omega Tau Rho, and runner-up for REALTOR® Magazine’s 2001 Good Neighbor Award for his work with the Tomorrow Fund, an organization that helps families of children with cancer.